This morning, I tuned into Stephano streaming Legacy of the Void. Simply, I was blown away. I have watched various streamers over the past 2 weeks, and most of them are still working out through new units and strategies. Even if he hasn’t solidified his builds, Stephano played with the decisiveness in engagements and ease of micro that made him an instant success in Wings of Liberty, and it was a tremendous pleasure to watch. I watched him play 3 ZvT and 1 ZvZ games, so let’s dive into some analysis about what he did.

(Just prior to this game, Stephano played another game against Semper, which I believe he lost. Feel free to rewind. I also recommend pulling up the link and following along with time markers anyways)

Stephano starts with a relatively conventional Hatch-first opening. After fending off Reaper harass with excellent Drone micro (not losing a single one), he first spots Hellions around 4:10. Fortunately, he had already begun walling off his ramp with Evolution Chambers. 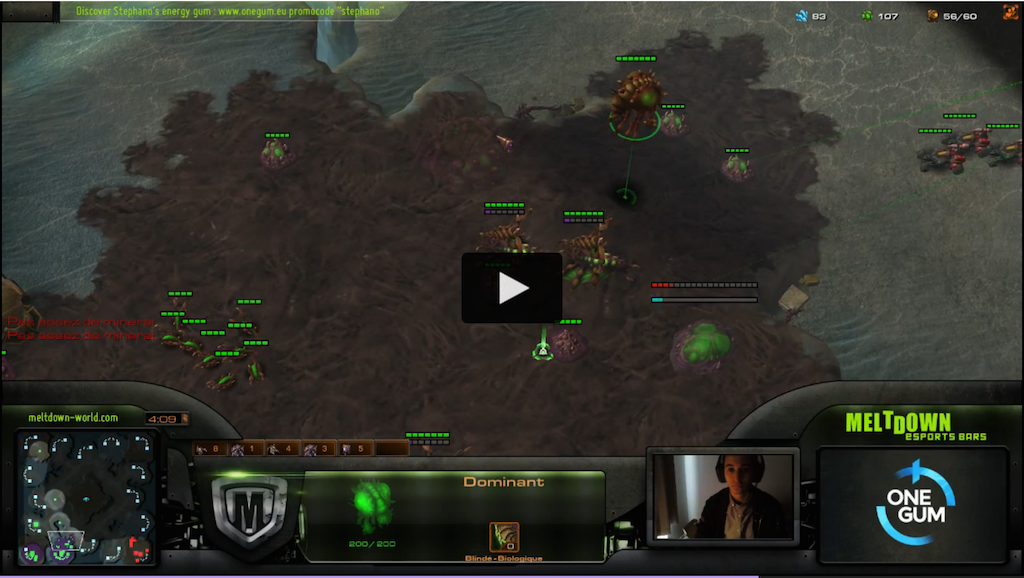 From my beta-less perspective, Lerilak Crest seems to be a bad map for ZvT: the ramp into the natural is huge, and the 3rd base needs to be closed off by falling rocks. Because of his 3rd base timing, Stephano actually doesn’t need to defend it yet against the Hellions because it is still building and has no Drones. As such, he is able to defend with 8 Zerglings and 4 Queens. Yikes.

The first Banshee shows up around 5:05, which he has both Queens and Spores ready for. You can also see the Hellions lurking around the edge of the fog of war as well. 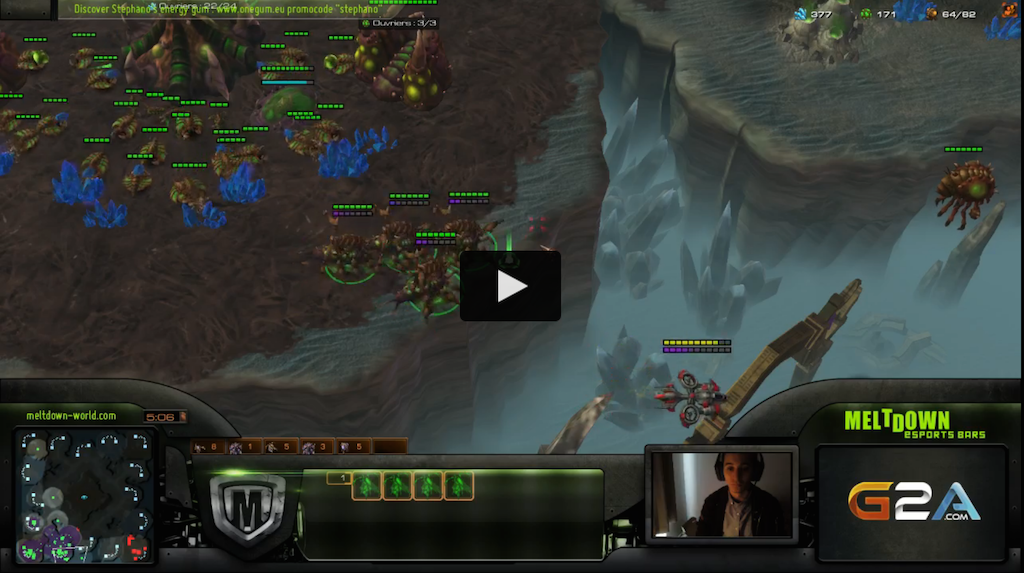 Around 5:30-5:40, Stephano finally starts getting defense in the form of 2 Spine Crawlers and more Zerglings. He still haven’t left his base, but he is well on his way to saturating his 3rd base. 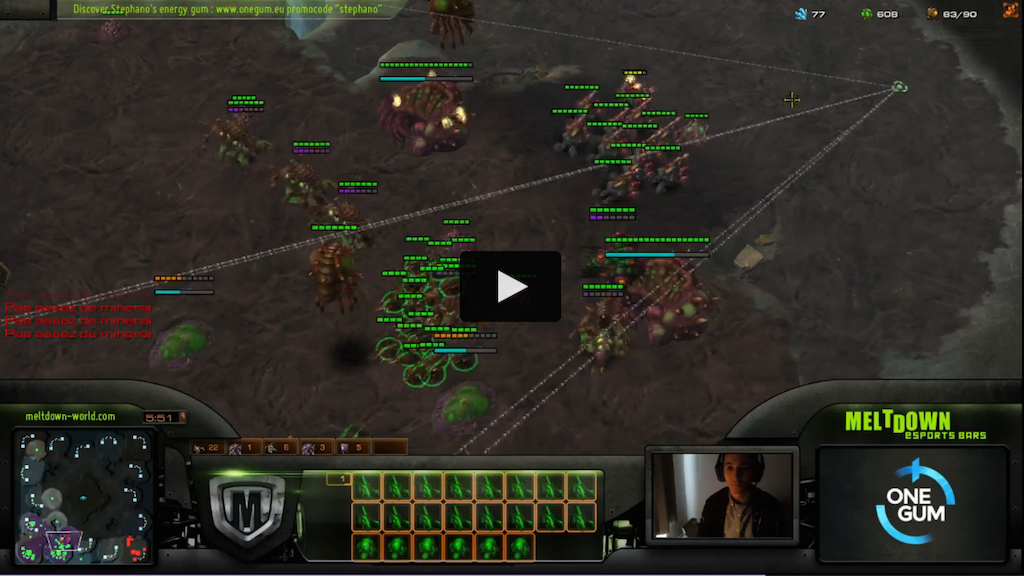 Stephano starts a Hive at 7:20 (~10-11 minute Hive in HotS) and still has barely built any units. Only when Semper pushes in with a Hellion/Cyclone force at 7:40 does he quickly build 12 Hydralisks with his near 1000 minerals/gas bank. 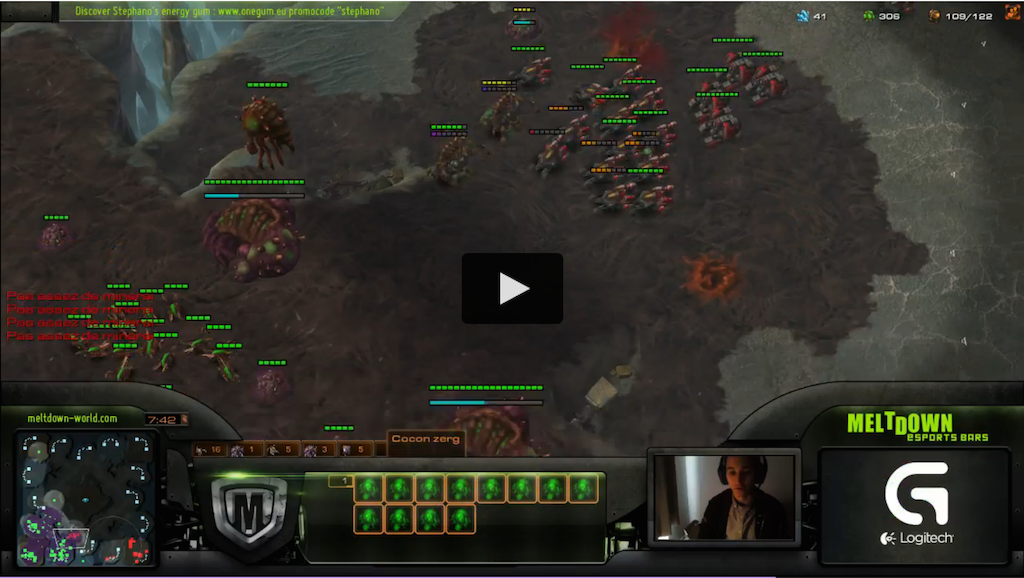 This attack is bad. He has both Evolution Chambers destroyed with upgrades halfway done. Semper doesn’t put into Stephano’s base, but he maybe could have and won. Regardless, Semper is satisfied to keep Stephano contained on 3 bases (note: I have no idea how many bases Semper got over the course of this game because Stephano only saw the 3 original bases and 1 expansion on his side of the map).

At 8:30, Stephano starts his Vipers. At this point, he’s actually still quite vulnerable, and Semper poke in again at 9:24. With some clever Spine Crawler placement, however, he builds a concave within his own base that Semper can’t push into without Siege Tanks. The Spine Crawlers even block traffic so that Hellion run-bys can’t get through. 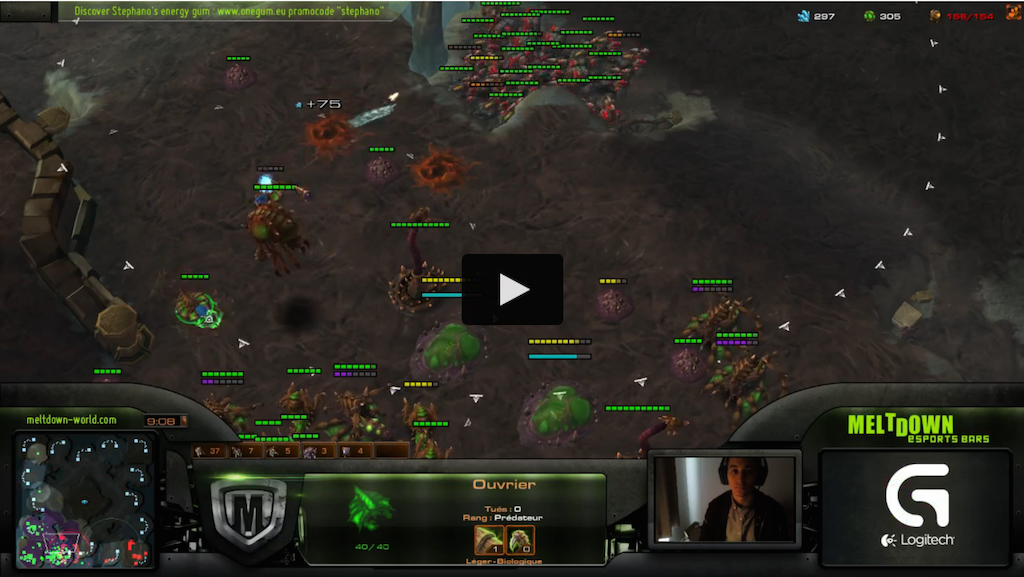 Around 10:30, Stephano takes his first engagement outside of his base. There’s a bit of cat-and-mouse, and it looks like Stephano is just giving chase. However, he uses his Vipers to Abduct the Cyclones, which normally give Zerg players a lot of trouble. This creates enough space for him to try to take a 4th and 5th base. 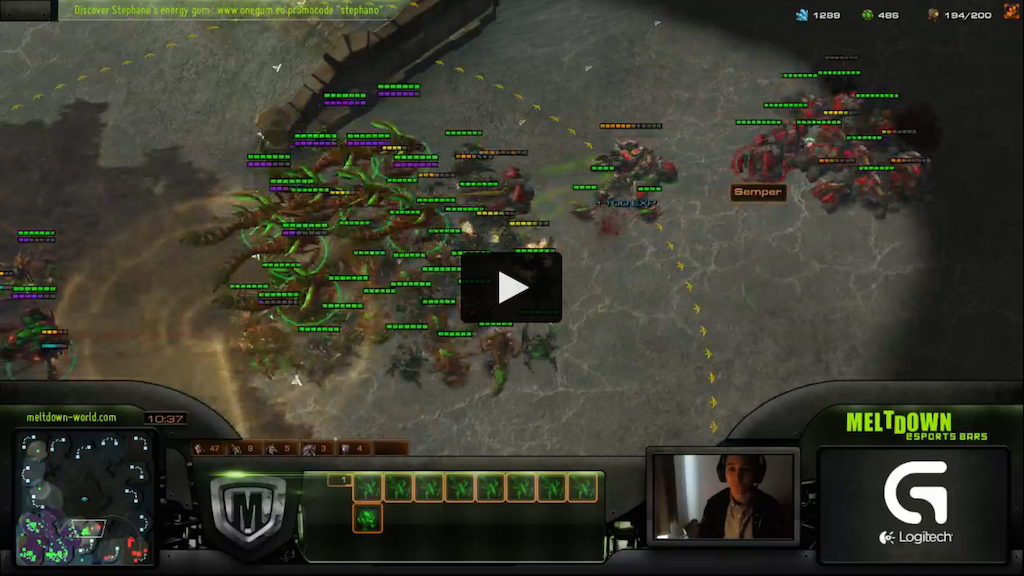 Around 11:00, Semper starts getting very aggressive with Banshee harass. This pulls Stephano’s attention around the map. However, he deals with it in a relatively new way: Parasitic Bomb (around 12:30). I can’t say whether it’s the most cost-efficient: a few Mutalisks would have been good, too. And Semper wises up and learns to split his Banshees. But it’s still pretty cool. 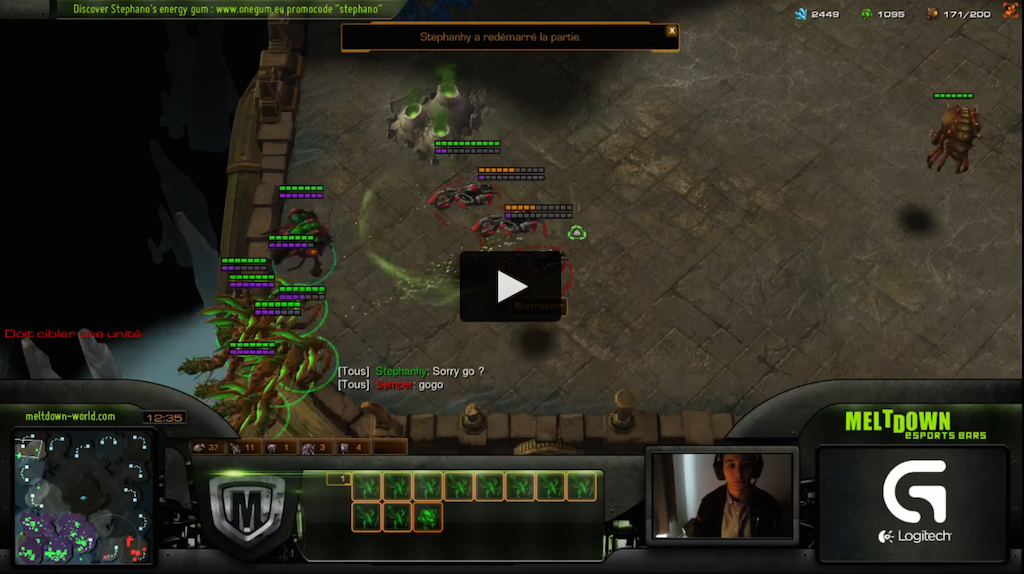 Around 14:40, Stephano finally pushes with his Roach/Hydra/Viper army (with a few Lurkers mixed in). He again Abducts Cyclones and getes a good Parasitic Bomb off with his enemy stuck on the ramp. 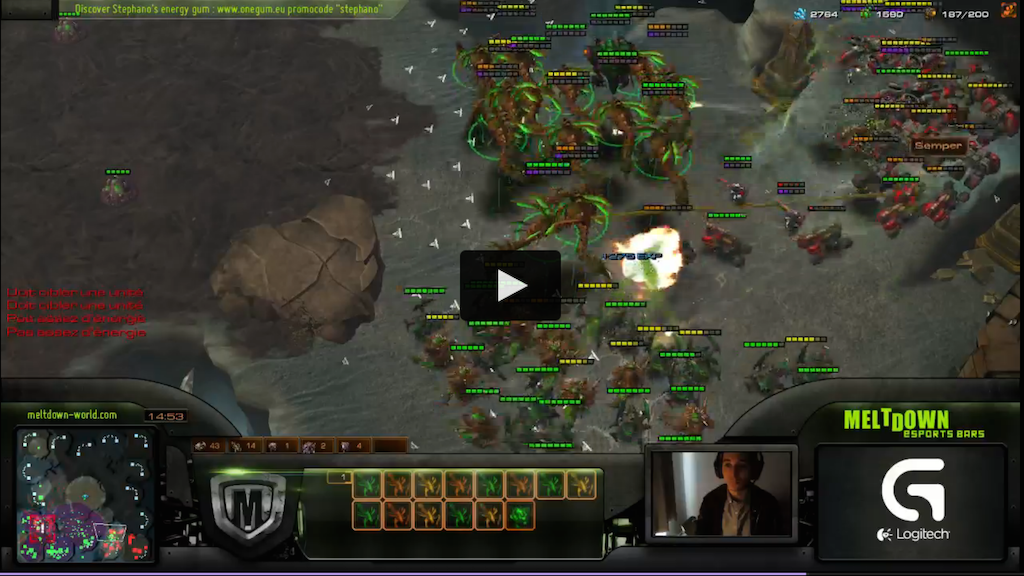 He gets up into the natural, but the push disappointingly ends with a Nuke destroying all of his Vipers. You could have fooled me: Stephano, the chat, and I all missed the “Nuclear Launch Detected” notification. I’m not sure if they made it quieter or changed what it sounds like, but it was very disappointing. 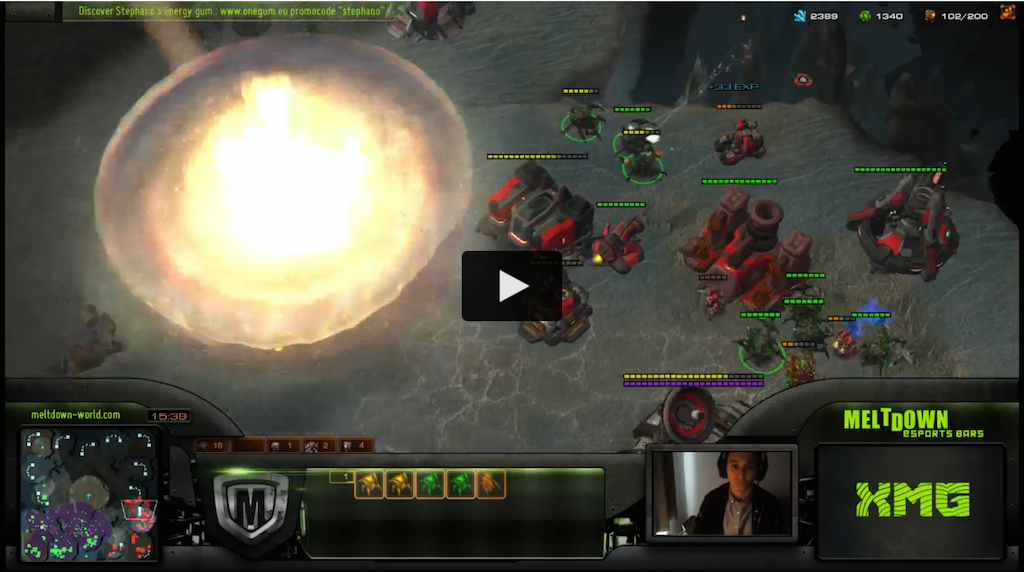 From there, Stephano takes a few more bases, and the game goes on for quite a bit longer, but that was basically it. There were a few highlights, though.

At 20:40, Stephano takes another engagement that most would agree looks terrible, and yet he manages to trade well in it. He Abducts the Cyclones and Blinding Clouds the Siege Tanks. 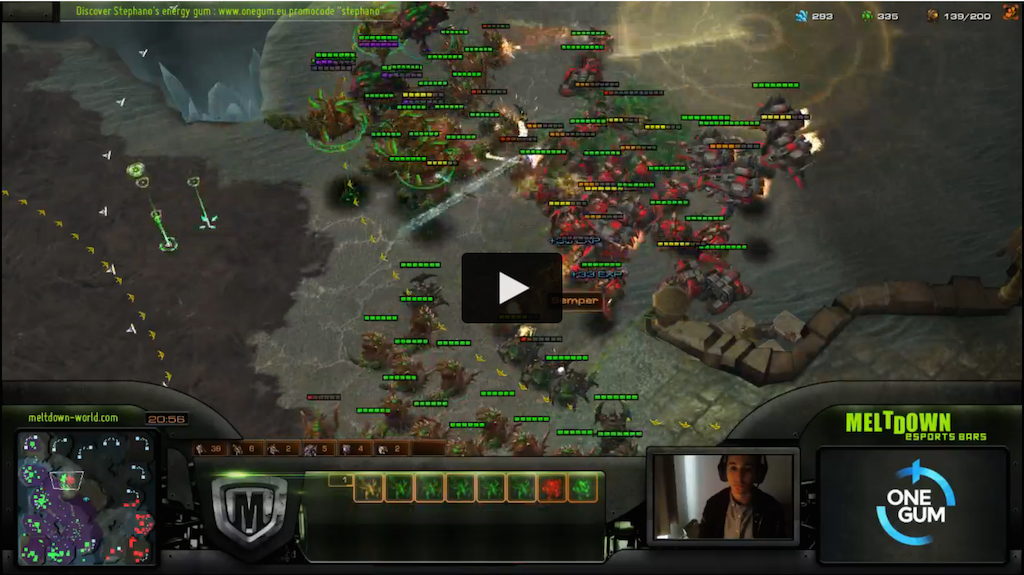 In the meantime, he loses a mineral line to another nuke, but this leads into another clutch Stephano play as pre-created Changelings (which I can only assume he did intentionally?) are used to trap a cloaked Ghost and secure the kill. 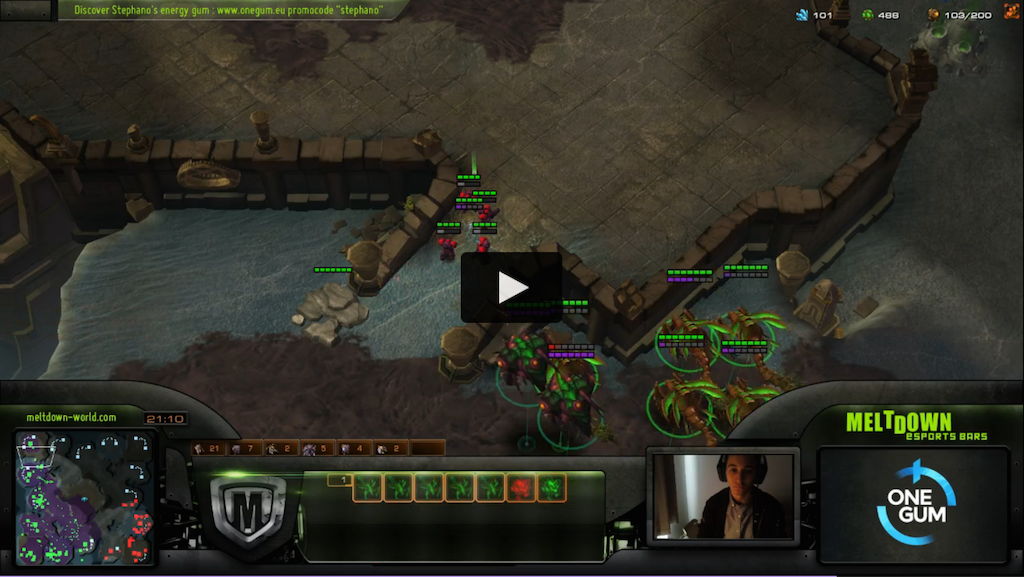 At 24:30, he takes another Stephano fight: he charges into a Terran mech army that already is sieged and spread out. And yet he casts some good Blinding Clouds and Parasitic Bombs and comes out ahead. 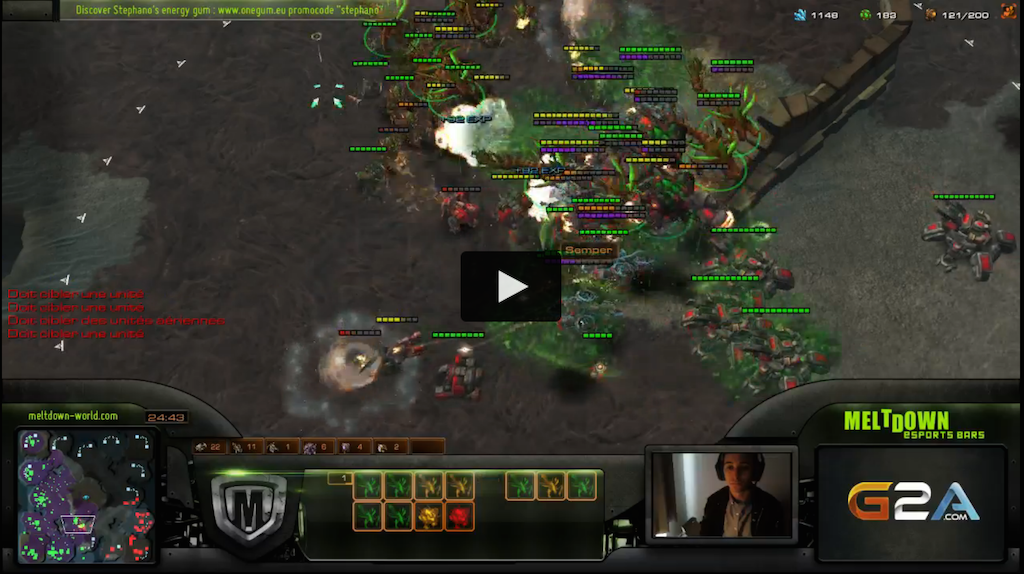 But it’s not enough. He loses anyways.

I think what’s most striking in Stephano’s build is the lack of a mid-game. He only starts mixing in Roaches after he has his Vipers out, and its the Vipers that are really the core of his army. Getting to that late game so quickly, however, has its costs.

Despite defending just perfectly for most of the game, he did so with basically no map control, and I think that’s what ultimately costed him the game. Despite taking fantastic engagements, he was unable to pressure Semper at all around the rest of the map with his relatively immobile army. As such, Semper could trade ineffectively knowing that he could re-max easily with better and better engagements. We can only guess what might have happened if Stephano had heard the nuke, but it would have been narrow.

(Edit: removed a paragraph where I incorrectly believed that Parasitic Bomb could affect ground units. For the record, it only affects air units. Thanks /u/kestnuts!)

One last observation is that this ultimately is just a classic Roach/Hydra/Viper composition, except with the Parasitic Bomb as a new fancy ability for Zerg. Compared to the classic Zerg late game with Brood Lords, it still doesn’t get quite as cost-efficient, and it may be a prerequisite to have enough map control to stably hold 4-5 bases (especially with the LotV mineral patch changes) to maintain this army.

Stephano probably become most popular for his ZvP, where he popularized (if not developed) the quick mid-game Roach to late-game Brood Lord/Infestor transition that defined Wings of Liberty. Even though it is a different matchup, his ZvT exhibits the same pattern: tight, passive macro in the early game to accelerate towards late game armies where his control excels. I know I can’t control my army like Stephano, but his play demonstrates the possibilities with the new LotV units and their abilities, and I hope this is an indication of what is to come.

So I said I watched 4 Stephano games. He ends up winning the other 2 ZvTs using another very Stephano composition with Ultras and Infestors. I would definitely be open to doing a similar analysis of that game if you guys like it. Or if there are other replays/VODs you would like to see, you can comment on this post, email me at spawningtool@gmail.com, or (preferably) upload them to http://lotv.spawningtool.com where I can easily pull out the build orders.

Would you be interested in a writeup for Stephano's ZvP with Ultras?