I chose this build for a replay of the week because of the similarities it shows to Heart of the Swarm. The only main changes are what you can afford and when. Also, in Legacy of the Void, CC First is a much more viable build because of how fast you can get the command center down, compared to the rush distance on maps. The economy change made it so every race can get down buildings and expansions faster, but the time it takes for a unit to go across the map still stays the same, making greedy builds more viable in this new expansion.

Legacy has been pushing towards a more micro and agression based play. With all of the changes, it is harder to get maxed because of how fast your enemy attacks or you attack. Also, in my opinion, upgrades matter even more because turtling is harder to do.

This build starts off with a CC First into a quick 3-rax play. The point of the build is to try to get +1 attack, stim, combat shield, two medivacs, and 16 marines out as fast as possible. When you get these units, you have a ton of utility on the map to do one big attack, multi-prong attack them in their 3rd and main, or just force units out of them. After the starport goes down, I add a quick 4th and 5th barracks to create a strong followup push. This makes the build very all in. It is very hard to transition when you are constantly building out of 5 rax, a factory, and a starport. The amount of units that come for the followup push make up for this though.

One important thing is to stop producing SCVs once you get two base saturation and 3 gases.

Again, this is a very micro oriented build. Misclicks lose games with builds like this. I managed to get lucky and snipe his morphing banelings this game, but if they had formed, I would have split, picked up, and then kept on with the multipronged attacking!

Group D was the group of death: the reigning SSL Champion (Classic), the reigning GSL Champion (Rain), MVP’s top Protoss player (YongHwa). And Snute came out on top with an aggressive heavy Hydralisk style in ZvP.

Snute opens with a safe 15 Pool, 16 Hatch to avoid a cannon rush and transitions into a relatively normal 3rd base timing around 4:00 and Zergling speed soon after. Around 7 minutes, he goes up to 30 Zerglings to deny Rain’s 3rd base and immediately goes into Hydralisk production. He uses those to destroy the 3rd base again and create a soft contain. The safe opening allows Snute to apply pressure before typically 2 base timings come in from Protoss.

From here, Zerg will typically transition into either Infestors to lock down the Stalkers or more Vipers for the Blinding Cloud, but Snute gets away with building only 2 Vipers. Most of us don’t have army control like Snute, but he pulls it off with smart positioning and baiting forcefields. Keeping the Viper and Infestor count low leaves more gas for Hydralisks.

There are a few caveats to this style. First, this build is likely a response to the prevalence of Blink Stalkers in the current meta. Against a more traditional Colossi army, the mid-game pressure timing is much tighter. This seems like the biggest potential risk to this style

Second, there are different ways to transition. In his other games, Snute also opted for Roach Zergling pressure early on, so there are options for staying aggressive.

Third, Snute delays upgrades for a long time. His first attack/armor upgrade is +1 missiles at 12:00. This might be a risk against a double Forge style with more armor upgrades to buffer against the Hydralisks. To sustain the attack, you probably will need to go up to 4 bases. Snute gets it very late in this game, but you can see other timings in his games against Classic

Fourth, the late-game composition is presumably more flexible for how the Protoss responds. Against High Templar, Snute opted for more Roaches. If he had seen more Colossi, I would guess you would get more Vipers for the Abducts.

Check out the rest of this series and Snute’s series against Classic for more games like this http://spawningtool.com/28108/ 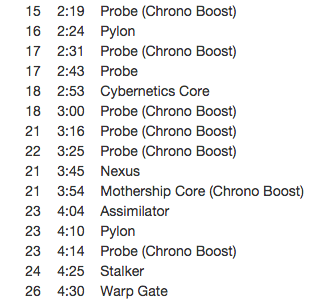 Chrono Boost has been marked as an issue to address for a few months now but has been a known issue for over 2 years. It has been tricky because the data between casting abilities and building units is hard to line up. END_OF_DOCUMENT_TOKEN_TO_BE_REPLACED