(This was originally posted to reddit but reproduced here for posterity) 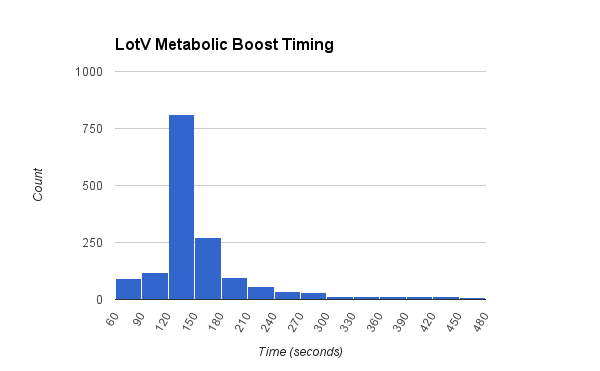 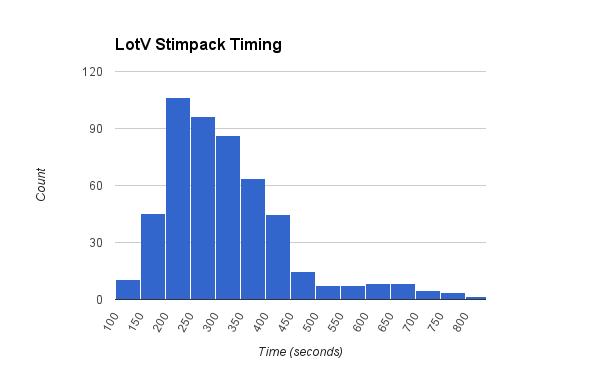 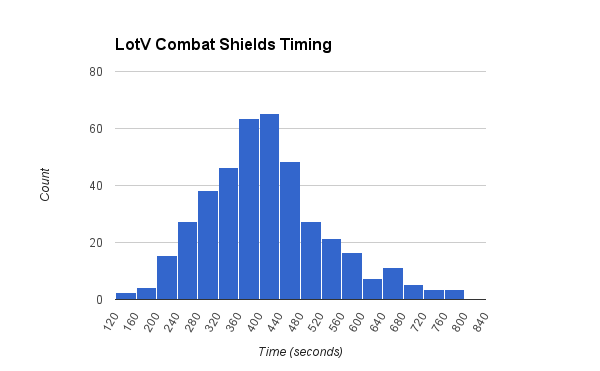 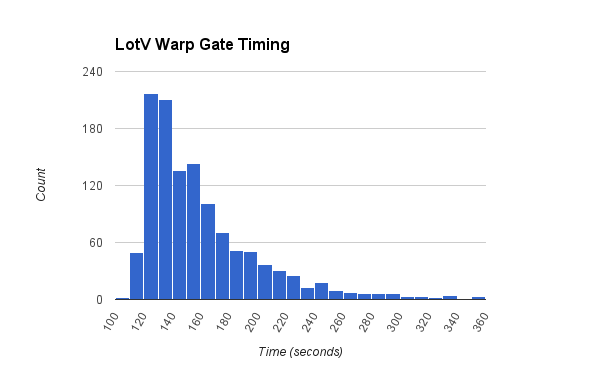 These histograms show the research time for various upgrades in Legacy of the Void. The data comes from ~2200 replays uploaded to http://lotv.spawningtool.com of all levels of play from the beginning of beta. About 25% of games are from professional tournaments. The same includes about 1500 Zerg replays, 1200 Protoss replays, and 1000 Terran replays.

The graphs are bucketed by LotV (real-time) seconds. In some cases, extreme outliers to the right have been removed from the data for a better visualization. Note that the Warp Gate timings may not be exactly right while Blizzard tweaks with the exact impact of Chronoboost, but it should still be very close.

If you want to play around with the data yourself, you can see it at

Let us know if there’s anything else you want to see from our data. We will try to see what we can do, but in the mean time, play around with the research tool to see what you can find yourself! http://lotv.spawningtool.com/research/winrates/

Also, if you could help us make the data as accurate as possible by uploading your replays, that would be amazing!

Thanks to DrennoC for the inspiration here!

View this build on Spawning Tool

I saw this build on /r/allthingsterran. /u/Bakemonoda had posted a video on the build where he explains the build. He was more than willing to upload the replay and let me do a write up on it for a build of the week, so thanks to him for that.

Basically this build puts the pressure on the protoss before they can get a warp prism out, then the cyclones can deal with the warp prisms after it’s out :D. The protoss opens standard, but this build still does a good amount of damage/game ending damage.

The goal is to do some damage with the proxy reaper, then follow up with cyclones to finish off the game/put yourself in a game winning position.

The proxy reaper is extremely effective in LotV right now. The reapers arrive before a mothership core is out (on a two base protoss opening) and they can do big damage by kiting around the adepts/stalkers. The bombs also disrupt mining/give extra kills.

By the time that the mothership core can get out (if the protoss decides to make it), there will be a cyclone to target it down. After the third reaper, you can also lift the barracks and float it at a ramp/cliff, for the cyclones, so they can have vision and target stalkers/adepts on top of the ramp. This takes away most of the defenders advantage that the protoss would normally have with terrain.

Reapers also can give vision by jumping up on the cliffs/suiciding up ramps to give vision.

Using the reaper bombs to keep the stalkers/adepts from attacking is also another strong thing that you can do to keep the cyclones from taking damage. The reapers are only there to distract/tank for the cyclones. The fact that both of the units in this cheese have high speed makes it hard for the protoss to deal with. The only thing that they can really do is try to save the MSC to photon overcharge some or use the adept ability really well to counter the speed of the terran units.

The latter is the best of the two in my opinion, because photon overcharge only last like 11 seconds as of the last patch.

The followup for the build is just getting another CC and another factory (if you want to go mech). If you want to go bio, I would reccomend floating the barracks back home, switching it with the factory after about 3 cyclones, and starting stim right away, along with more barracks.

Over the past few years, Spawning Tool has grown a ton. Thanks to tournaments organizers and casual players, we have accumulated over 30,000 StarCraft 2 replays with 13 million build steps and 400,000 tags. Although the site can generate interesting statistics and predictions from the data, it can be daunting for players to find strategies to actually use in-game. You have to dig through hundreds of replays and hope to find a good, clean build order. We wanted to make that easier, so we’re releasing Spawning Tool Build Orders.

END_OF_DOCUMENT_TOKEN_TO_BE_REPLACED

What do you do if you see a cannon rush? Maybe you cancel that base and go to the 3rd base location instead. Maybe you pull a few workers to try to poke it down in time. Or if you’re hydra, maybe you just pull the boys and go for a worker rush.

hydra goes Pool First against a Forge Fast Expand. His first expansion is to the gold base, but his Drone crosses paths with a scouting Probe. Seeing no natural expansion, the Probe turns around to cannon rush the gold base. Then, hydra pulls all except 3 of his workers with 6 Zerglings in production to go for the all-in.

Note one clever moment when hydra pulls back his Drones to wait for the Zerglings. Perhaps even more importantly, he saw the Probe leave the base, and that Probe could have potentially scouted his Drone rush with enough time wall in. By hiding them in the corner for a few seconds, he keeps the surprise on his side.

One more thing: hydra has his Drone mineral walk into his opponents base. This is quite important as this would allow him to walk past a “hold position” Probe into the base to attack a Photon Cannon. Stardust wasn’t walled in at all.

I wouldn’t recommend this as a planned opening, but keep it in mind as a response to a cannon rush. The game is going to degenerate quickly anyways, and I guarantee that this all-in will be quick.